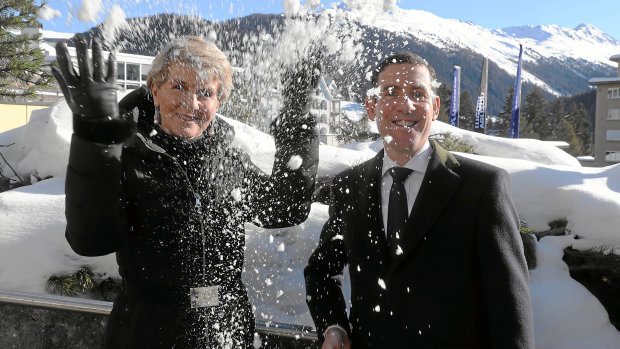 Davos, Switzerland | Supply-chain finance behemoth Greensill has buckled to a backlash against abusers of its core business, weighing up whether and how to refuse service to clients who “bully” small businesses by charging them just to get their invoices paid on time.

Speaking to The Australian Financial Review while attending the Davos forum, the company’s founder and chief executive Rich Lister Lex Greensill, and his new Asia-Pacific chairwoman Julie Bishop said Australia’s “healthy debate” on this had prompted a major strategic rethink.

“The truth is that until now we have basically said that it’s the company’s prerogative to decide how people pay their suppliers. Historically we haven’t told our customers how they have to operate their business – and that may change,” Mr Greensill said.

Greensill’s model is to pay the invoices of a company’s suppliers early, and collect the money from that company later, earning revenue from the fees and interest it charges for allowing both sides to have that cash for longer.

It funds this by packaging up the debts and raising money on the bond market, using the purchasing company’s credit rating.

‘Caused us to pause’

Greensill touts this as a cheap and easy source of cash flow for small businesses in a supply chain, but there’s an increasing rumble of discontent, as articulated by the likes of Small Business Ombudsman Kate Carnell.

Some large purchasers are using this “reverse factoring” to require suppliers to pay extra just to get their invoices redeemed in the standard time frame of 30 days.

“The focus of people like Kate Carnell has caused us to pause and say we actually need to think about the way that our capital is being delivered … We’re in the process of formulating a position on eligibility for our products moving forward that is consistent with the view that Kate and indeed the AFR has espoused,” Mr Greensill said.

“We should be celebrating the fact that we deliver cheap credit to those who need it, as opposed to by the back door being somehow used to bully small companies. We should be giving that low-cost money away to benefit the economy, not using it to somehow stretch out how long it takes to pay.”

Ms Bishop, who joined Greensill last week, said the focus was on ensuring Greensill was backing small businesses: “We want to ensure that the use of our product aligns with our overall philosophy of supporting small business. There are ways and means of ensuring that alignment.”

Mr Greensill said the challenge would be to identify which businesses were small enough to qualify for special consideration, and to know when misdemeanours were occurring.

“There isn’t a way to instantly know that, so if we want to offer a better deal, a preferential deal for businesses which are the engine of our economy, how do we do that?” he said.

“Rather than throwing stones at one another, we should sit down and have a constructive dialogue about how should we be given the information that enables us to do just that.”

Mr Greensill’s rethink does not extend to the other issue commonly raised with reverse factoring – that it allows companies to conceal balance-sheet weakness.

“It has been misdescribed that supply chain finance allows people to hide liabilities on their balance sheet. That’s simply not true,” he said. He says liabilities to suppliers should be accounted for in the same way as borrowed money.

Mr Greensill also revealed that his new product, an app that allows workers to draw on wages that have been earned but not yet paid, will be rolled out in Australia sooner than previously planned.

The British launch is imminent, but the company had committed to rolling it out in Australia only by June.

“We’re looking to accelerate our go-live in Australia, so you may even see that happening in Q1 this year,” Mr Greensill said.

“We’ve had an extraordinarily strong reaction in the Australian market, particularly from big corporates.”

For more, read the full article at Australian Financial Review.