The technological revolution has transformed the global financial landscape, but there is even greater change on the horizon.

Artificial Intelligence, the accumulation and interrogation of Big Data and the startling computational advances in Machine Learning are revolutionizing the very building blocks of business and society.

Digital innovation has enabled the disintermediation of the finance sector to evolve so rapidly over the past decade that billions of dollars of capital are being unlocked and put to work each day that otherwise would be trapped in a traditionally moribund banking system.

The result is that companies of every size, in every sector, in every country on earth now have the capability to access the cash they need to allow ideas to flourish and trade to happen.

This revolution has been nowhere more apparent than in Working Capital Finance where Greensill, one of the leading providers globally, uses technology and financial innovation, which will enable it to unlock $150 billion of financing by end of 2019 to more than 8 million customers and suppliers all over the world.

Greensill calls this process the “democratisation of capital”, as its platforms and products make money available to the smallest of SMEs on the same favourable terms as it has traditionally been supplied to the largest multi-nationals.

This democratising and inclusive approach to finance is key to broader economic prosperity.

A healthy and thriving supply chain, with technology-enabled working capital finance, is essential to the success of larger companies that rely on the products and services supplied by those same SMEs.

Supply Chain Finance (SCF) has been the highly successful mainstay of working capital finance for at least the past three decades.

Much of SCF’s early success lay in its simplicity. Suppliers submitted preapproved invoices that were paid quickly at a discount by a third-party financier while buyers could settle bills much later.

In so doing, SCF 1.0 helped both sides in a transaction manage cashflow and risk with much more certainty.

The challenge with SCF 1.0, however, was that it was only made available to a small handful of large suppliers as the logistics involved in bringing them on board were cumbersome and the access to capital was expensive.

Greensill, which was born a little over seven years ago, transformed that approach with the creation of SCF 2.0.

SCF 2.0 is a technology-driven SCF platform for the digital age that employs easy online sign-up for suppliers, simple integration with existing Enterprise Resource Planning Systems, and a robust financial foundation in the capital markets to bring what was once an exclusive privilege for large suppliers to any supplier of any size that can provide a pre-approved invoice.

"We are always looking ahead, asking ourselves how we can further revolutionize supply chain finance."

And yet, even as SCF 2.0 remains in relative infancy, technological advancement has allowed Greensill to develop the next iteration of this democratising force, known simply as SCF 3.0.

As the suppliers who have provided invoices to Greensill over the past seven years automatically feed information into the firm’s systems, troves of data accumulate that become a vital resource in providing an even more efficient route to unlocking capital.

The quantities of data are so large, in fact, that the only way to analyse them and put them to the most effective good use is with artificial intelligence and machine learning.

“We are always looking ahead, asking ourselves how we can
further revolutionise supply chain finance,” says Bart Ras, UK
managing director of Greensill.

The financial services industry is leading global investment in customer-facing applications for artificial intelligence, which research group IDC predicts will grow from almost $8bn in 2016 to more than $47bn by 2020. That is a compound annual growth rate of more than 55%.

The fundamental benefit of Greensill’s SCF 3.0 is speed of payment. Suppliers on the system can expect cash to be remitted either upon issuance of purchase orders or the moment an invoice is recorded.

This is all down to Greensill’s machine learning algorithm. The technology can forecast the likelihood of a purchase order or invoice being approved and signed off and how long that process will take.

That means the risk level of each invoice can be calculated instantly and accurately, so the buyer is no longer required to irrevocably approve the invoice first.

Greensill can make an early payment to the supplier quicker than ever before, upon purchase order issuance or invoice booking, because the data has calculated the risk.

Of course, being a self-learning algorithm, any changes or deterioration in the suppliers’ creditworthiness can be factored in instantly.

“We call this the Data Driven IPU,” says Bart Ras. “It brings the liquidity forward and means suppliers can now make use of the funds earlier than ever before. There are advantages for buyers as well because they can use the power of early payment to negotiate better terms with their suppliers.”

Throughout the evolution of SCF 1.0 and 2.0 the core legal principle which enabled a financier to offer an early payment remained the buyer’s commitment to pay a supplier in the future – the Irrevocable Payment Undertaking, or IPU. 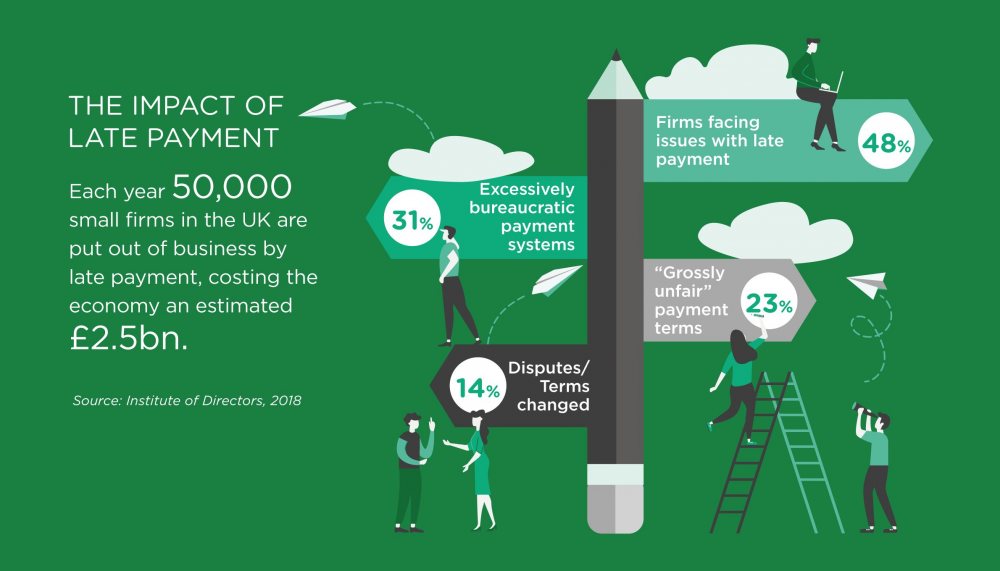 With SCF 3.0 the buyer is no longer giving Irrevocable Payment Undertakings to a financial institution, which simplifies the whole process enormously.

This simplification, in turn, eliminates the current debt reclassification discussion among certain ratings agencies and makes the accounting  treatment of such programmes straightforward.

Over the past three years ratings agencies including Moody’s and Fitch have raised concerns about how some large buyers might employ SCF facilities to reclassify debt that can, in turn, make it harder to determine their true financial position. SCF 3.0 ends that discussion.

A wholesale approach to reducing risk is key to SCF 3.0, says Bart Ras. “This time we haven’t applied incremental innovation but adopted a whole new methodology that will address issues of optimisation in SCF 2.0 and tackle the concerns rating agencies have about these facilities.”

"A whole new methodology will address issues of optimisation in SCF 2.0 and tackle the concerns rating agencies have about these facilities."

The Greensill algorithm will also spot irregularities in invoice patterns, an indication of errors or fraud. That is very useful information for the buyer’s accounts payable teams.

While the benefits to cashflow are obvious to buyers, Greensill’s system also provides a benefit to the top line. As data is core to the DDIPU, Greensill pays buyers for historic and real-time data so the artificial intelligence can make a forecast on each invoice based on the most up to date information available.

"Until now we have always relied on the rear view mirror to try to predict what will happen,” says Greensill’s Bart Ras. “With artificial intelligence and Supply Chain Finance 3.0, the future is clear to see."

SCF 1.0 emerged 30 years ago allowing suppliers to submit pre-approved invoices and be paid quickly while the buyer of the service could settle bills on later payment terms.

SCF 3.0 exploits data, machine learning and AI, allied to Greensill’s expertise in capital markets, to unlock working capital, speed up payments and reduce risk and deliver SCF to a much wider range of businesses. 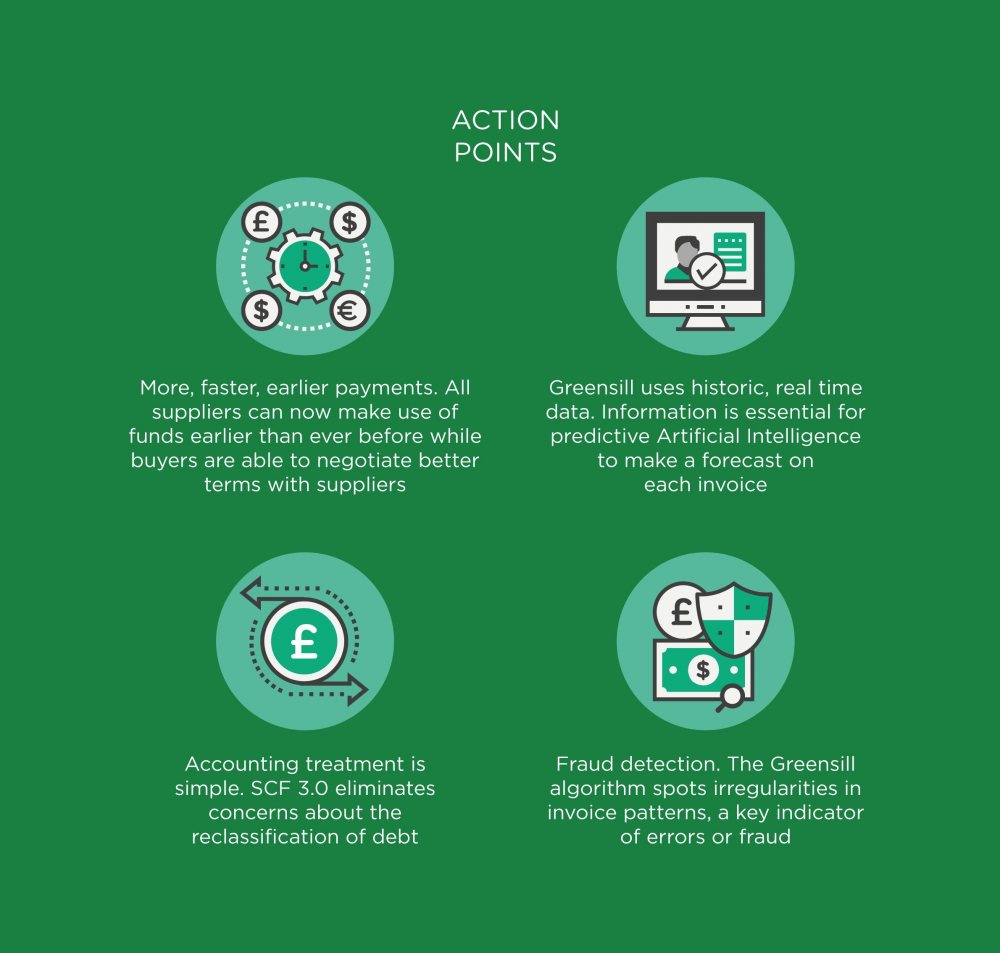 Invest in the Real Economy with Working Capital Finance

The working capital finance revolution has created a game changing proposition for investors seeking a valuable alternative to money market funds and other short-term liquidity vehicles.